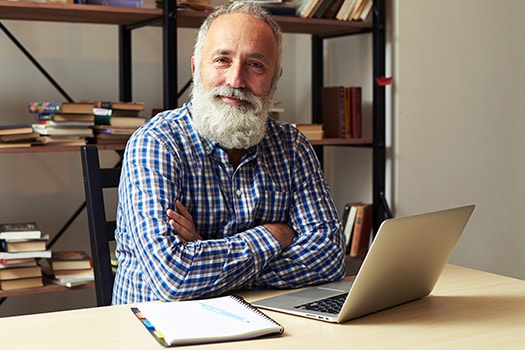 A 2016 study revealed social media usage among the senior population tripled in a five-year period. These social networking platforms help seniors stay connected with their loved ones and interact with people from around the world. Here is a quick look at five social media stars who have become adept at this technology.

At the age of 98, Porchon-Lynch is the oldest yoga teacher in the world. Over the years, she has marched with Mahatma Gandhi, helped Jews escape the Nazis during World War II, and danced on national television. She now uses her social media accounts to spread her message of peace, love, health, and happiness to thousands of followers and to promote new yoga instructors.

Seniors who want to remain healthy as they age can benefit in a variety of ways when they receive professional at-home care. Green Valley, Arizona, Embrace In-Home Care is here to help your loved one accomplish daily tasks, prevent illness, and focus on living a healthier and more fulfilling life.

Growing up, Ari Seth Cohen always had a passion for photography, writing, and fashion designing. In a 2012 interview, he claimed the lack of mature faces in lifestyle and fashion media was a trend he wanted to change. In addition to working on his Advanced Style blog, he is also active on Twitter, Instagram, and Pinterest. Ari is known for his eclectic blend of colors, designs, and fabrics, which he refers to as “advanced style” fashion.

In addition to running an active blog called Style Crone, Judith Boyd has a massive following on Twitter and Instagram. She has spent the last few years helping older women embrace fashion, and she wants to take back the word “crone” and give it a more positive meaning. Boyd started her professional life as a psychiatric nurse, but she quickly realized fashion was her true passion. She now releases weekly blogs and videos that highlight hats, purses, and other accessories for older women, and she has been featured on dozens of television networks and newspapers such as Washington Post, CNN, The Denver Post, and Huffington Post.

Tom spends his golden years passing on his knowledge of the culinary arts. He began his career as a chef at the age of 15 in a small BBQ restaurant just outside San Antonio. In addition to offering free cooking classes and videos on YouTube, he also runs a small consulting business for restaurants that are looking for new recipes. Some of his most famous videos over the years have accumulated hundreds of thousands of views and likes.

If your senior loved one needs around-the-clock assistance at home, the Green Valley, Arizona, 24-hour home care professionals at Embrace In-Home Care are here to help. Our proprietary Balanced Care Method was designed to promote longevity by encouraging seniors to focus on healthy eating, regular exercise, mental engagement, and other important lifestyle factors.

Although she is the grandmother of Hollywood actor Miles Teller, Leona Flowers is making quite the name for herself on social media. Her social media following skyrocketed after she sent out a series of hilarious Tweets while at the Oscars with her grandson. She has recently been called the “Coolest Grandma Ever” by Huffington Post, and her Twitter page has over 14,800 followers.

If your loved one has been diagnosed with Alzheimer’s disease or another degenerative health condition, you can use social media platforms and discussion forums to learn about the different symptoms. The days, weeks, and months following an Alzheimer’s diagnosis can be challenging for both seniors and their families. However, these challenges can be made less stressful with the help of caregivers trained in professional Alzheimer’s home care. Green Valley, AZ, Embrace In-Home Care is here to help your loved one enjoy the golden years while simultaneously managing the symptoms of Alzheimer’s. To learn about our high-quality senior care plans, get in touch with one of our professional Care Managers at (520) 625-2050.